‘Whose guitar breathes acoustic breezes by the river?

To knead the fingerboard like this one has to be Oliver,’

An angel with a mbira in a golden gourd asked upstream,

Though it wasn’t hard to tell the voice among the reeds.

‘I’m playing Ndega Zvangu because my friends are gone;

We chose Zimbabwe but it’s not yet my turn to be born.’

‘Tell me why it’s taking you thousands of years to be born?

Still speculating about where there is more wine and corn?’

‘Haha, not so much the wine but the women and the music;

Music is one syllabus I mastered more than any academic,

So I chose the country whose sound is closer to my taste,

Where the young are brave and the beautiful are chaste.’

Oliver was in Havilah, that heavenly city of the unborn,

Still considering taking up the marimba and the horn.

Lately, the cherubims had taught him the acoustic guitar,

And he was due to take Gabriel’s tutorials for the mbira. 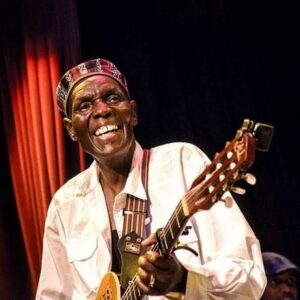 Earth preferred the guitar less than the music of the gun;

Countries were teen felons getting high on nuclear in 1951.

Oliver did not relish being born into this tone-deaf world,

But the longer he waited, more ironies of history unfurled.

‘Oliver, I figured you are still procrastinating your birth

Because earth’s history is a senseless ceremony of death,

But that’s just the reason why you must be getting ready;

Your music will make many trigger-happy hands steady.

‘These six thousand years you have grown into a master.

You see beyond the furthermost cookie of the forecaster;

Visions in your music will be standing past your lifetime.

When you’re built like this, death can’t hold your prime.’

Only birdsong and an orchestra of seraphs in the distance

Were heard as Oliver weighed the angel’s words in silence.

He had to leave Havilah soon for the turf of his mortal race.

‘I hear you, Gabriel, but my worries are more complicated.

I can’t choose privilege and wind up among the implicated;

But what if I choose poverty only to become an accessory?

Can’t you see the choices of my mission are contradictory?

‘Peace I want to sing but on earth you earn it through war;

Unity I love but can a saint shake the bloodied hand of a foe?

Is compassion for the poor criminal disregard for the victim?

Where is the bigger war, in my heart or against the system?’

His friend, Dorothy, was stuck between Azania and Zimbabwe

Till Gabriel had told her it was possible to straddle the lane.

She had progressed like a prodigy in a family called Masuka;

Thomas, the shaggy mbira man, had also left for Zimbabwe,

With pent-up agony for horrors in Situation Room screened.

He nightly listened to Sekuru Munhumumwe by the fireside,

Telling stories of a disease that decayed the ancestors’ pride.

‘No easy answers, Oliver, earth below is a fallen civilisation,

But each time a child arrives there from this holy station,

Hope is planted anew in that morally contradictory planet;

Only, the child chooses to be salt or to rot in the dragnet.’

Just then Biggie and James dropped by dressed like rockstars

Even without their guitars, they were built like popstars.

‘Oliver, why are you already singing about Safirio’s death?

He can’t have passed infancy since his Zimbabwean birth.’

‘You know it, James; before we are born, we see the future,

I think Oliver has been shown something about Mukadota.’

‘But I can’t see anything of the sort about our old friend,

All I can see is his ridiculous on-screen family with Susan.’

‘Neither do I; Gabriel, can you bring us up to speed on this?’

The furthest we see ahead of Safirio is as a comic hit on ZTV.’

‘Well, that’s because you will complete your own race earlier.

Nothing to worry you; your legacy will also stand long after.

‘And still on the race, Oliver has something to tell you both.’

‘Ah, man, don’t tell us we are about to be left by Mukosori!’

‘It’s true, Biggie, I have had enough millenniums to choose

‘Zimbabwe it is; this time next year I will be on the loose.’

‘If Gabriel says you will still play after us, I am going now.

I was undecided about Zimbabwe but together we can wow.’

‘Are you sure about this, Jimmy, you always wanted the UK.

Anyway, that ties into your songs about Bindura and Unit K.’

‘Zimbabwe it is, you can still go with Rise to the coloniser,

As for me and Mukosori, Highfield is just right for Jikinya.’

The archangel commended the choice but had one disclaimer:

There was no guarantee of retrieving songs out of Havilah.

‘To be born, Jimmy, is to cross an ocean of forgetfulness

Many songs and skills you created while you were here.

Once you open your baby fists,  you talents spiral away.

‘But your choices and environment can take you to them,

Stay woke, great man, life is the name; chess is the game.’

So James was about to be foetally immersed in amnesia,

With no guarantee of connecting to Havilah in Rhodesia.

Biggie stood by moved to join these two Zimbabweans. 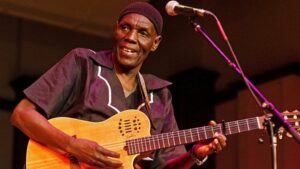 Wait, my soul brothers, I can see clearly the path fate took:

It’s 1990 and I am now with Safirio and Jimmy’s former band.

Jimmy is performing Jemedza and we’re torn by his pain.

‘And because I am in Bible college I can see clearly ahead;

Though we popped before Tuku, he will cover all the earth.

Across the millennium, when greatest Africans are named,

I see only Tuku, Umdala Wethu and Mugabe in the hundred.

‘But, Gabriel, what’s the point of knowing if we will forget?

Do I still have choices when the script of my life is written?

We choose our demography here but do we choose destiny?

If I will never know, I’m still proud of our collective legacy.’

This story, Mr. Everybody told me at Pakare Paye, early 2019,

As he prepared to join his friends and Sam across eternity.

‘As I begin my journey, I can remember everything clearly.

See that you set everything down as I said in your poetry.’